skip to main | skip to sidebar

Remember Obama telling us that 2% GDP is the new NORM? 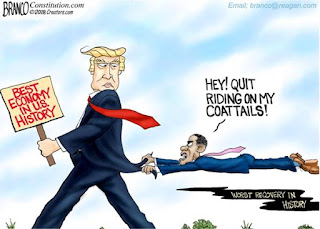 During the 2016 Presidential campaign, Obama proclaimed that Donald Trump had no plans to improve the economy and bring back manufacturing jobs. Obama also stated that Trump would need a "Magic Wand" to keep any of his promises.

Well, Mr. Trump must have found a "Magic Wand" because he is keeping his promises and
The new NORM is hovering around 4% GDP!

Comments are invited!
Send feedback to:  WatchDog
Posted by Watch Dog at 1:24 PM

And now Obama is claiming credit for the 4% gdp ,, what a hypocrite !

Guns in America: How to Buy, Sell & Shoot in Every State